Obstructive sleep apnea (OSA) is a highly prevalent disease in which upper airways collapse during sleep causing a complete or partial breath cessation. One of the foremost consequences of these breathing pauses is a major fragmentation of sleep, causing a marked deterioration of sleep quality. The main complaints of OSA patients are snoring and excessive daytime sleepiness, which result in a substantial decrease in life quality. Untreated OSA is a major risk factor for both chronic and acute conditions such as cardiovascular events and even sudden death.

The gold standard for OSA assessment is the polysomnography (PSG) in which patients are connected to numerous sensors. The cost of PSG and the complexity of the study motivate further development of alternative approaches for screening subjects at risk for OSA. OSA severity is defined by the number of obstructive apnea and hypopnea events per hour of sleep (apnea hypopnea index – AHI).

Snoring, caused by the vibration of soft tissues in the upper airways (UA) is one of the common symptoms of OSA. Snoring has long been viewed as a potential indicator for monitoring OSA, and it is especially advantageous when using a non-contact microphone as the screening tool. However, as of yet, it has not been properly exploited in diagnosis. Similar to the vocal tract in speech production, the upper airways acts as a variable acoustic filter in the generation of snoring sounds. Patients with OSA commonly have narrower and more collapsible UA then non-OSA subjects. Therefore, it is expected that the acoustic characteristics of snores from OSA and non-OSA subjects will be different. In this research we hypothesize that the snore signal carries important information about the OSA condition.

Our group has suggested a system that analyses the entire nocturnal audio signal and combines several developed acoustic features with a classifier in order to classify subjects as either OSA snorers or benign (non-OSA) snorers [Ben-Israel, Tarasiuk, and Zigel, 2010]. OSA patients were recruited prospectively and consecutively at the Sleep-Wake Disorders Unit, Soroka Medical Center (Head of the unit: Prof. Ariel Tarasiuk). The results that were achieved using 60 subjects with different OSA severities were very good; the obtained sensitivity (specificity) was 96.5% (90.6%) for resubstitution and 87.5% (82.1%) for cross validation (CV), where sensitivity and specificity stands for correct detection of OSA and non-OSA subjects, respectively. A patent for this system has been submitted [Zigel, Tarasiuk, and Ben-Israel, 2010]. Recently, our research was granted by the Israeli chief scientist, Ministry of Industry, Trade & Labor [KAMIN, 2011-2013].

Since there are studies that have confirmed that OSA is associated with anatomical and functional abnormalities of the upper airway, and since speech signal properties are also influenced by the anatomical structure of the upper airway, we investigated the correlation between OSA and speech signals [Zigel, Tarasiuk, and Goldshtein, 2008]. Using speech signal processing techniques, we explored acoustic speech features of 93 subjects who were recorded using a text-dependent speech protocol and a digital audio recorder immediately prior to polysomnography study. Following analysis of the study, subjects were divided into OSA (n=67) and non-OSA (n=26) groups. A Gaussian mixture model (GMM)-based system was developed to model and distinguish between the groups; discriminative features such as vocal tract length (VTL) and linear prediction coefficients (LPC) were selected using feature selection technique. Specificity and sensitivity of 83% and 79% were achieved for the male OSA and 86% and 84% for the female OSA patients, respectively [Goldshtein, Tarasiuk, and Zigel, 2011]. 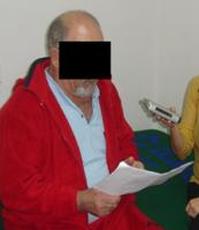 Another study was performed by our group in this area of OSA. We analyzed EEG signals in order to estimate slow-wave activity (SWA), a marker of sleep homeostasis, in children with OSA before and afteradenotonsillectomy (TA) compared with untreated OSA children (comparison group) [Ben-Israel, Zigel, et al., 2010]. The conclusions were: